Bittersweet post. After 7.5 years, Strength Bootcamps has ended at the end of 2019. Christine and I started this … Read More

Fall Back Into Fitness!

With fall comes the re-focusing of those goals you set way back in January.  Ready to get back … Read More

Check out our HOT Summer Deal, get in great shape, have fun and save $, too! Strength Boot … Read More

They told him that the most he could expect to lose on a fitness regimen was only 10% of his body weight and there was a strong chance he would just gain it back again.

In tears, he said he would not subject himself to gastric by-pass and that I was his only option. I assured him that he could lose weight and get healthy, but he had to 100% committed because he was facing a tough road ahead.

Andy was so de-conditioned that when I first put him on an exercise bike, I didn’t even turn the bike on. Not only that, but he made it more challenging by missing three of the first five workouts together.

Since he was so overweight his entire life he could not see himself losing weight and getting “in shape”. He literally had to “trick” himself into working out. He made up other reasons for showing up to the gym because Andy could not come to terms with the idea that he was actually there to “work out”.

For motivation, we immediately started setting small, specific goals that needed to be hit every two weeks. Gradually, Andy started seeing results. We needed to get past what the doctors had told him. So his first major goal was to lose 10% of his body weight. He did this in a few short months. We were walking, slowly biking, slowly and lifting light weights. I told him that we would gradually need to change his diet and slowly modify his entire life.

We ran into challenge after challenge, but stayed positive by keeping our focus on achieving small, short-term goals.

I will abbreviate and tell you that Andy has become a real champion. Over the past 5 years, he has lost over 170 lbs! His weight is now in the lower 200s. He now regularly competes in three and six mile races. He is also focused on his first 10 mile race. He was even a guest speaker at a recent fitness retreat. Andy has continually set challenging goals. He approaches them with courage and passion. 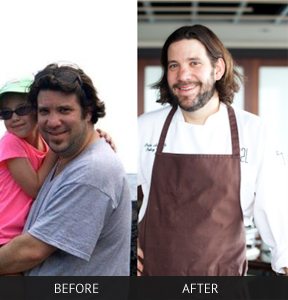 In September 2012, friend and neighbor, John Edwin, told him about the new Strength Bootcamps that were just launching. Peter signed up and has faithfully attended Mondays and Wednesdays since. The results, physically, are amazing and obvious; Peter has lost close to 40 pounds and looks and feels years younger!

Beyond that Peter says bootcamp affects him mentally, as well. Peter says he feels much more focused, motivated, positive and productive on bootcamp days.

“I had no idea that it was possible to have so much fun at 6:15 in the morning! It really is a great way to start the day and I enjoy every minute of it”

“When John Edwin told me about Strength Bootcamp, and said, “join up, it will change your life!”, I was skeptical, but I am always up for a challenge. The first few sessions, I was humbled by the way that the more experienced campers were hustling through the workout, while I really had a very hard time finishing. I had been “working out” at the gym several times per week, but this was a different animal altogether. Those few sessions put me on notice of where I was, and where I wanted to be. After the first five weeks, it got easier. After 10 weeks, my energy level skyrocketed. After 5 months, I have lost nearly 30 pounds, and feel like a different person, just as John told me I would! I couldn’t imagine a better start to the day, than at Strength Bootcamp, with a great group of people trying to help each other get and stay fit!”